In my first entry last October I said I would only keep this blog updated if I had things to say, which is why it's largely fallen silent as time has moved on. Since crossing the halfway mark I've been far more aware of time passing, and my desire for it to pass. In a lot of ways I feel like by the time I was maybe five months into the year here I had gained as many insights into Korea as I was going to get, or maybe even wanted.  In the run up to coming here, when I spoke to ex-TEFLers who had lived in Korea, boredom was often cited as one of the reasons they left, and while weekends are fine (and of course, too short), midweek boredom is certainly a factor, when not only is your job pretty unsatisfying but you can't have a proper chat with anyone at work, ever, because you're the only one there who really speaks English.
My parents came all the way across the world to visit last weekend, which was a good chance to reflect on everything that the year here has and has not been, as well as a chance to do some sightseeing in Seoul and treat them to the weird Korean experience. It was probably the first time I felt like I properly cleared my head of work and nonsense since coming here, given that 8 of my 10 annual vacation days are yet to come. Now would be the perfect time to post a photo of them passed out after a long day sightseeing, but they'll kill me. Instead here's one of us at Korean barbecue. 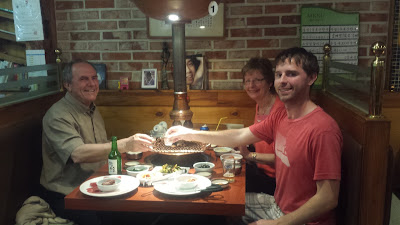 The pointlessness of my job
I'm not sure how much I've explained about my job, but essentially I'm not a teacher. Hagwons (one last time, that means private after-school English academies) employ at least one native English speaker because parents will pay more to know their kids are learning from a native. The trouble is, while my boss knows she needs me, she's at a loss about what to actually do with me. The school focuses on prepping the kids for exams which are 100% written exams, so what use is a teacher whose main asset is native pronunciation, when they never get tested on it? Because we can't speak (much) Korean and certainly can't teach through it, we've been assigned the made-up and poorly thought-out role of "Speaking Teacher", which is essentially an excuse not to give us books, and they tell us to come up with a topic for presentation class after class for the week. It's mind-numbing, it's pointless, the students learn nothing and there's no progression from week to week. It's not teaching, but I've learned here that making suggestions as to how things can be improved is akin to openly saying you think management is shoddy, and you're best to keep your mouth shut and wait for your contract to end. I've met people who described their TEFL jobs in Vietnam as being "the white face of the school", and that's a pretty good description of what I am.

Time is Running Out/"I'm Moving to Busan"
Tomorrow I start skype interviews at work for the person who will replace me come Halloween. I guess I have to strike a balance between honesty and not scaring away applicants who might want a more authentic teaching job, or a more exciting town. The best thing about teaching in Spain was that I was able to choose a place, move there and find a job. In Korea though, it's completely out of your hands, especially if you work in public school, though my recruiter intentionally kept me in the dark about job offers in the hope that I would jump at the first one I got. While I was sold the idea that I was basically in Seoul (not quite), another teacher in my town was told we were very close to a surf beach (absolutely not). Recruiters have a tendency to lie. All this lack of choice usually leads to people trying to move south in their second year, and shouts of "I'm moving to Busan" are cropping up again - Busan is a city on the south coast, milder weather, a beach and a more liberal attitude by Korean standards, and also where I initially applied for, but had no luck.
That's all, folks
Really, that's all I've got. Since coming here I've covered work culture, the school system, hierarchies, alcoholism, my inability to relate to natives, the depths of winter, the pleasantries of spring, too many taekwondo and peace-sign photos, too many self-important moans about work, the border with the North, the great food, among other things. I'm happy to share my own experiences here as long as they remain fresh, and I can supplement them with anecdotes on the differences with life as I knew it before being in Asia, but I think the well may have run dry for now. There'll probably be a couple of musings as my departure draws nearer, but for now I think I'll fall quiet for a bit.