My chopstick skills are coming on leaps and bounds

I wouldn't say time is flying, but it feels like I've been here a lot more than two weeks (that's probably the opposite of time flying, come to think of it). I guess starting work the day after you arrive will do that to you. I spent this weekend on a staff workshop/team building weekend, though we certainly didn't work any shop, and the only team building that was done was after far too many shots of soju and poor quality Korean beer. There was a lot of eating excellent spicy local foods while sitting on the floor (that's their main place of comfort for eating) and I even got to do Norebong - that is, rent out a karaoke booth and sing your heart out into the early hours of the morning, which I was glad to cross off my list so early. I'll certainly be back for more of that. The whole weekend felt very authentically Korean, and something I wouldn't have gotten to do if I were just a tourist passing through. If all my weekends end up being as fun as this one I'll be happy to hang around here for a good stretch. Anyway, on to a few things I've been taking note of since arriving here. 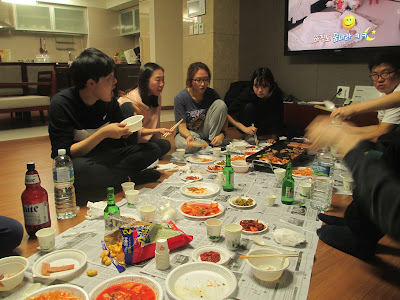 The Korean Love of Western Culture
This is one that most of us have already heard of. That whole "big in Japan" thing stems from the idea that everything Western becomes popular in Asia, even if it doesn't at home, because they love anything Western they can get their hands on. It is true to some extent, but on a very superficial level. They love white skin here, and go to great lengths to be as pale as possible, with some people even undergoing dodgy medical practices to attain paler skin. South Korea has the highest rate of plastic surgery per capita in the world, and much of it is for smaller noses, larger eyes, and other things they associate with Western beauty. A straight man walked over to me as he was getting off the metro in Seoul and told me I was very handsome, and a gang of youths said it to me as I was passing them on the street one night as well, which was a nice contrast to what gangs of youths generally say to passing foreigners back home. Most of the staff, my boss in particular, have commented approvingly on my "nice small face" several times in the last 2 weeks. As we all know I'm a pretty average looking chap, but if you're white here, you're in the good books. That doesn't mean they've adopted Western ideologies though. Their conservative views are still rampant, from the more harmless ones of disliking piercings and tattoos (my boss told me she was going to sew up the holes in my earlobes) to the less pleasant ones such as their homophobia - after accepting the contract for this school I was contacted by the middle man between the recruitment agency and the school, who emailed me in a panicked tone to make sure I wasn't gay, and told me he had to ask because it "wasn't allowed in their culture". It's not so much a love of the West, then, as it is a love of white skin.
Groupthink
Collectivism plays a big part in the Korean psyche. The students I have are a pretty good reflection of this. A lot of the teenagers appear not to have developed a sense of individuality in the way we tend to in the West, and hate to be seen as in any way different from their peers. Things move in fads - they don't really have favourite things, but rather say their favourite film, for example, was the last one they saw and liked. It's quite strange to go around a class asking 15 students what their favourite film and song is, and for every single one to answer "The Martian" and "Sugar" by Maroon 5, respectively. And it makes trying to keep a conversation going in a classroom a hell of a lot more challenging (and significantly less fun). They have their moments of hilarity though; I couldn't help but laugh when, after telling one class we were going to play a game instead of learn grammar, the students sat and applauded politely instead of cheering.
I had to go get medical tests done in the hospital last week because of my job. Instead of it just being my boss bringing me, she also insisted the other expat teacher come along (losing his whole Friday morning before work), and decided to bring her friend for the excursion as well. So all four of us took a trip to make sure I wasn't HIV positive (phew), and then went out for lunch afterwards. Live by the group, die by the group.

Hierarchy
Stemming from their old Confucianist traditions, hierarchy in society is held in extremely high regard. I'm not yet used to having students bow to me in the street instead of waving, or seeing how my Korean colleagues stand up when the principal walks into the staff room, or how none of us can leave work until she does, even if we've finished our classes. My classes finish at 7.30 in the evening, but none of us can leave before 8.30. This seems to be a mixture of the 2 heading above - it's both the idea that we can't leave before our superiors, as well as the fact that Koreans always do things in groups. It also very much ties into their hardworking nature, but I promise I'll get on to that in my next post. It's been a long weekend, it's time for bed.